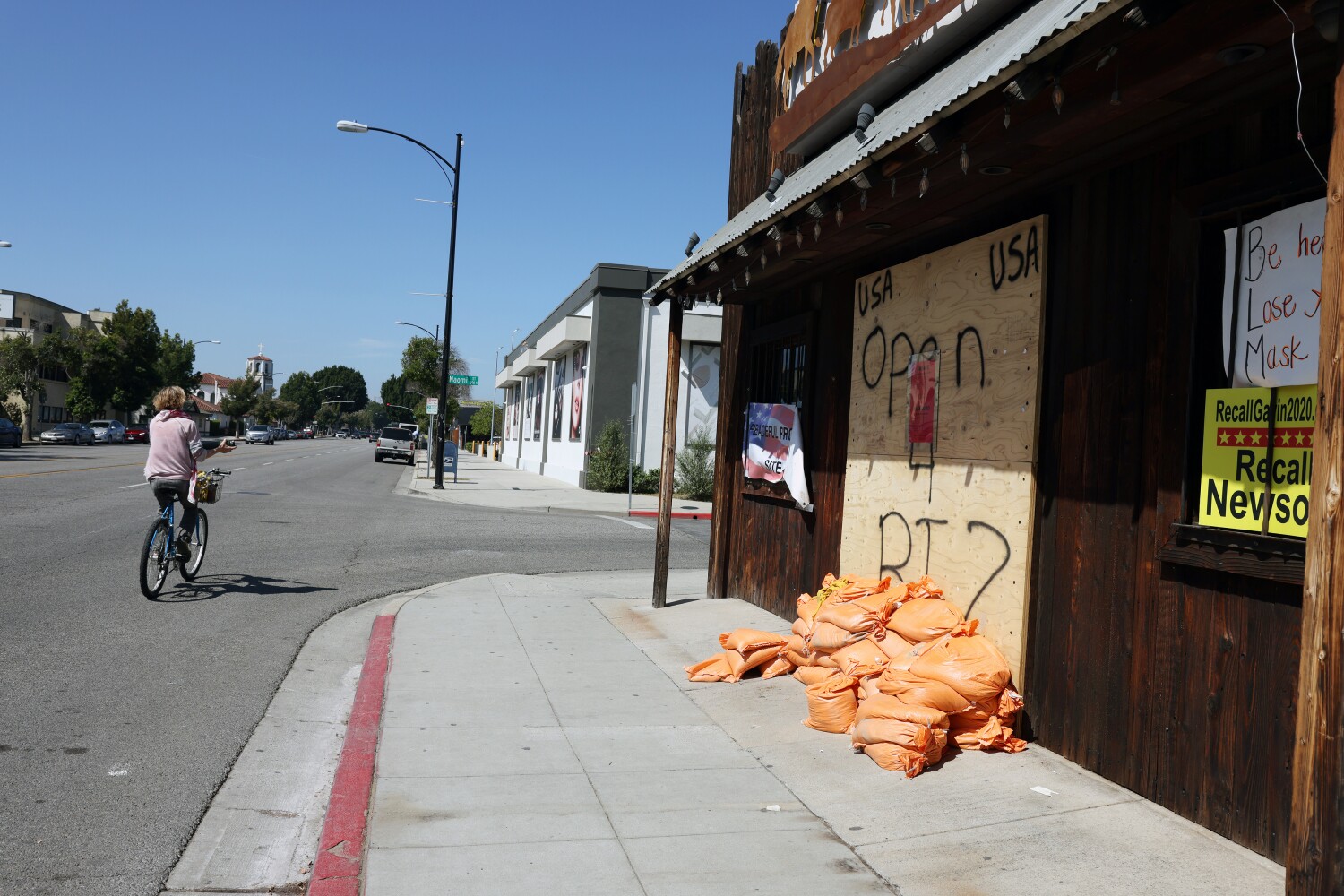 When Danny Rocha pulled up to Tinhorn Flats, a bar and grill in Burbank that’s been at the center of a battle over required restaurant closures during the pandemic, he was looking to get a burger — with a side of solidarity.

But the 30-year-old Glassell Park resident found the eatery’s swinging doors boarded up Wednesday, a spray-painted message of “Open 4 BIZ” nullified by a stack of orange sandbags propped against the plywood.

The day before, Lucas Lepejian, the son of the restaurant’s owner, was arrested by police for the third time in six days. He had started to remove the sandbags from the exterior of the Western-themed establishment, placed there by city officials to prevent entry into what Burbank has deemed an unsafe environment. The 20-year-old was released a few hours later.

Less than 24 hours after his release, Lepejian said he was mulling a plan to reopen.

It’s the latest in a saga that has pitted Burbank officials against the family-owned restaurant, which has consistently bucked county health orders amid the COVID-19 pandemic.

After offering takeout and delivery-only for a little while, Baret Lepejian said the restaurant was taking too much of a financial hit. They reopened outdoors.

On Jan. 8, the city of Burbank issued a notice of violation, calling out Tinhorn Flats’ violation of the health order.

By the end of the month, the county stripped the restaurant of its health permit, making it illegal to sell food. Even as other restaurants were permitted to reopen for outdoor dining in late January, Tinhorn Flats was required to keep its doors shut.

A sort of war broke out.

Power to the restaurant was shut off March 13 after the city received permission from a Los Angeles County Superior Court judge to do so. The Lepejians soon brought in a generator to provide limited electricity.

Several days later, the city padlocked the restaurant’s doors, which also was court-sanctioned. Lucas Lepejian sawed the lock off. Before his arrest Tuesday, he had been arrested Thursday and again Friday after he was seen leaving the restaurant.

The Burbank city attorney’s office is reviewing the cases. No determination has been made about what, if any, charges will be brought, but a criminal misdemeanor is a possibility, Assistant City Atty. Anita Clarke said.

Burbank has an entire page on its city website dedicated to updates on the battle with the rogue restaurateurs.

“This has been a challenging situation that may not be easily understood and resolved, especially when you are dealing with persons who willfully disobey the law,” the city said in a recent release. “This is a very divisive issue within our city and it’s at a time when we should be focusing on our recovery from the pandemic, but instead it is being overshadowed by this one defiant actor in our community.”

Burbank city officials declined through a spokesperson to comment beyond their public statements.

The restaurant, located in the heart of Burbank’s funky shopping district, has become one of many flashpoints pitting business owners against public health officials during the pandemic. Other restaurateurs have fought closures, including a Sherman Oaks bar and grill owner whose tearful viral video decrying the orders shows a film shoot’s large craft-services setup operating nearby.

A statewide restaurant industry group, along with a downtown L.A. restaurant, fought the outdoor dining ban in L.A. County Superior Court. After a sympathetic judge limited the county’s restrictions in early December, the 2nd District Court of Appeal on March 1 upheld the county’s right to implement the closures in the name of public health.

Since then, many of the arguments have become moot as Los Angeles County’s coronavirus case counts dipped low enough for it to advance through several tiers of the state’s reopening blueprint.

On March 15, L.A. County entered the red tier of California’s four-step color-coded reopening roadmap, allowing indoor dining to resume at restaurants at 25% capacity. Less than a month later, after L.A. entered the orange tier, indoor dining capacity could be increased to 50%.

But not at Tinhorn Flats.

Baret Lepejian, who lives in Thailand while his children operate the restaurant, said he receives letters from all over the world. Some write they want to kill him; others offer glowing praise of his defiance.

Before buying Tinhorn Flats 17 years ago, Lepejian worked in the nearby photo lab his parents opened in the early 1970s. Though he’s thousands of miles away, he said he supports his son’s actions. He’s vowed never to pay the fines — roughly $50,000 — the restaurant has racked up.

Despite the stance of the Appeals Court ruling, he insists L.A. County’s restaurant closures are not lawful.

Mark Geragos, an attorney representing the restaurant, said he felt the city has exceeded the court’s order. With the barricades and arrests, “it basically looks like the siege of Fallujah over there — over outdoor dining,” said Geragos, who has been involved in several similar suits, including one on behalf of his own restaurant.

“It’s a pandemic. It’s for safety reasons,” said the woman, who declined to give her name.

But Rocha, who wasn’t wearing a mask when he tried to stop by the restaurant, felt differently.

“The government’s coming between us and our stomach, and it’s an invasion of privacy,” he said.

A Burbank police officer stationed across the street was keeping an eye on the restaurant as Rocha stood outside. When he picked up one of the sandbags blocking access to the side door, the officer blared over the loudspeaker to put it down.

Officers were on hand to “make sure nothing crazy happens,” said S. Choe, who was on duty Wednesday.

Protests have sprung up near the restaurant periodically, drawing supporters from outside the city. Some have a penchant for using booming bullhorns to express their sentiments, according to nearby business owners.

It was quiet Wednesday, but people showed up once in a while to take pictures or, like Rocha, hoping to score a meal.

Lucas Lepejian couched his defiance of the closure as opposition to government overreach. He said he does not wear a mask and would not require employees or customers to either. He said he doesn’t pass judgment on those who mask up, noting, “We’re pro-freedom, not anti-mask.”

On Friday, the family will again face the city in another court hearing over the closure. Like his father, Lepejian has promised to keep fighting.

“We will never back down,” he said.

Hiking after a miscarriage: How L.A. trails eased my grief