Home » Health » “Earned It”: Arjun Kapoors Mid-Meal Snack Looks Worth Sweating Out For

“Earned It”: Arjun Kapoors Mid-Meal Snack Looks Worth Sweating Out For

Actor Arjun Kapoor, who’s ‘Sandeep Aur Pinky Faraar’, released recently is basking in the critical acclaim received by the film. The Dibakar Banerjee directorial also reunited the ‘Ishaqzade’ pair Arjun Kapoor and Parineeti Chopra. Their last film ‘Namaste England’ may have been a dud at the box office, but their on-screen chemistry is a hit among fans. Now, Arjun is busy prepping for his upcoming movies for which he is required to bulk up and the actor is leaving no stone unturned to look the part. He often takes to Instagram to share a glimpse of him working out in the gym, but on Sunday he also managed to ‘earn’ a yummy snack.

(Also Read: Genelia D’Souza Is In Festive Mood For Holi 2021 And We Have Proof!) 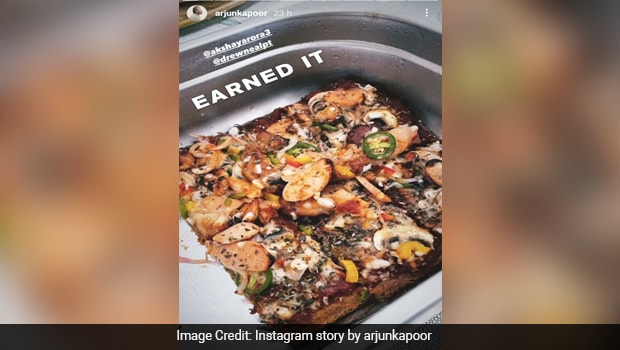 Arjun Kapoor is working out for his next film

Actor Arjun Kapoor has never shied away from admitting that he is a true blue foodie. In an interview with NDTV’s Aneesha Baig, he also went on to say that his entire family is obsessed with food. Arjun lost close to 50 kilos before making his debut in the industry, giving up on so many of his favourite snacks. The struggle was tough, but Arjun was determined to make it big as a mainstream actor.