From Food To Decor: Inside Priyanka Chopras New Restaurant Sona

Riding on the success of ‘The White Tiger’, Priyanka Chopra Jonas has added another feather in her cap – her new restaurant ‘Sona’. Priyanka, in collaboration with restauranteur Maneesh Goyal, has opened a much-hyped fine dining restaurant in New York City, serving Indian food. Preparations for the launch of the restaurant had been underway for quite some time, and now, the restaurant has finally opened its doors to Indian food aficionados. Are you curious about this new restaurant? Here’s all you need to know about ‘Sona’.

A look inside the Sona restaurant main seating area and you are immediately reminded of the grandeur of the Indian culture. The restaurant decor is a seamless amalgamation of rustic and contemporary design sensibilities with the subtle hues of gold, black and white presenting it all perfectly. 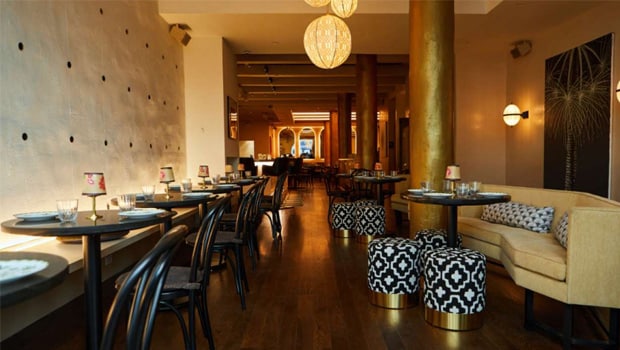 Apart from ambience, it’s the food that ultimately defines a restaurant. Sona’s food menu seems to quite interesting with some intriguing dishes. Restaurant head chef Hari Nayak gave a sneak peek into the menu through his Instagram page. From north-Indian kulcha (or New York naan) to south Indian specialities like appam, and Kerala Kaima rice, the menu at Sona seems to be quite expansive.

Inside the restaurant, there is also a private dining room called ‘Mimi’s, which also happens to be Priyanka’s nickname. This private space can accommodate a seating of 8 to 30 guests. Sona has also joined hands with art advisory Sunderland to showcase exclusive art from modern as well as contemporary Indian artists, at their restaurant.

Restauranteur Maneesh Goyal announced the final opening of the restaurant with an Instagram post and wrote, “This morning at SONA, we conducted a small puja or blessing ceremony. We’ll be seeing our first guests very soon and it was important to both @priyankachopra and myself that we hold a puja before our doors are officially open.

In another post, he appreciated all the contributions that Priyanka made in making this launch a success. “My kind friend @priyankachopra, who has been the creative force behind SONA. There is no one who better-and more boldly-personifies “global Indian” than Pri. SONA is so lucky to have her in our corner. From the design to the menu, to the music, to even the name, Priyanka has her fingerprints all over SONA. Love you, dear Pri! Our baby is finally ready for the world to see!”

(Also Read: ‘This Is Heaven’: Priyanka Chopra Jonas Enjoying Pizza Is So Relatable!)

About Neha GroverLove for reading roused her writing instincts. Neha is guilty of having a deep-set fixation with anything caffeinated. When she is not pouring out her nest of thoughts onto the screen, you can see her reading while sipping on coffee.