Actor Karan Singh Grover is riding high on the success of his show ‘Qubool Hai 2.0’. The web-series premiered on March 12, 2021 on a popular streaming site and fans cannot stop gushing about Karan Singh Grover and Surbhi Jyoti’s chemistry ever since. Karan and Surbhi became one of TV’s most beloved pairs after they appeared on the first season of ‘Qubool Hai’. Off-screen, Karan Singh Grover is happily married to actress Bipasha Basu. Just recently, the couple took off to Maldives to celebrate Karan’s 39th birthday where they partied and indulged their hearts out. Now that they are back in town, the foodies are back to eating clean.

According to Karan’s latest Instagram story, Bipasha is also an excellent chef. He shared an image of himself holding two plates. While one comprised a fluffy omelette served with the side of wilted spinach and cherry tomato salad, on the other plate, we spotted some open brown-bread sandwiches with cheese, olives and a few cold cuts. “Thank you Honey! @bipashabasu #chefbonniesdeli”, he wrote in the caption. For the uninitiated, Bonnie is Bipasha Basu’s nickname. 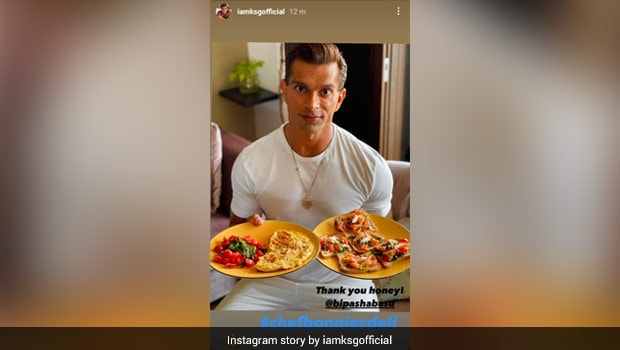 Karan Singh Grover and Bipasha Basu met on the sets of horror film ‘Alone’ in the year 2015. They tied the knot in the year 2016. The celebrity wedding became the talk of the town. Karan and Bipasha have appeared in numerous ad commercials and TV shows ever since. Last year, in 2020, Grover also appeared in action-thriller web series ‘Dangerous’ that starred Bipasha in the lead.

PCOS and its effects on skin and hair | Health News