Actor and singer Diljit Dosanjh has carved a niche for himself in both Bollywood and Punjabi film industries. In Bollywood, he featured in movies like ‘Udta Punjab’ and ‘Good Newwz’, and garnered accolades from people across the country. Besides impressing us with his singing and acting prowess, he has also established himself as a self-confessed foodie. If you happen to follow him on Instagram, then you surely have come across his food shenanigans. Diljit keeps sharing stories and posts featuring his cooking skills and meals every now and then. Keeping up with the tradition, he recently took to his Instagram handle to share a story featuring one of his latest meals on the sets of his upcoming movie.

Diljit, who is presently shooting in Canada, enjoyed a Punjabi lunch that included chicken tandoori, paneer tikka, chole bhature, salad and more. This meal was served by a Yogi’s Kitchen- a tiffin service in Canada, known for its home-style Indian dishes. To make it special for Diljit, each and every dish was named after his popular movies like ‘Rangroot’, ‘Good Newwz’, ‘Jatt and Juliet’ and more. Diljit shares a video story featuring the spread and also thanked Yogi’s Kitchen for the meal. Let’s take a look: 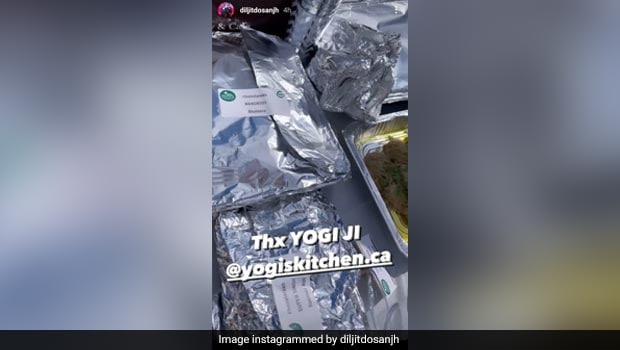 On the work front, Diljit was last seen in ‘Arjun Patiala’ and ‘Good Newwz’ in 2019. He will soon be seen in Punjabi film ‘Jodi’, alongside Bigg Boss famed Shehnaz Gill. This film will also mark his debut as a producer.

About Somdatta SahaExplorer- this is what Somdatta likes to call herself. Be it in terms of food, people or places, all she craves for is to know the unknown. A simple aglio olio pasta or daal-chawal and a good movie can make her day.